Difficulty Levels for Magic Legends are modifiers that further change and customizes the overall gameplay of the game. It throws players with bigger challenges, allowing them to master the combat mechanics and to obtain greater rewards. By default, players start off with the Normal difficulty. This page covers information regarding the difficult levels of Magic Legends. 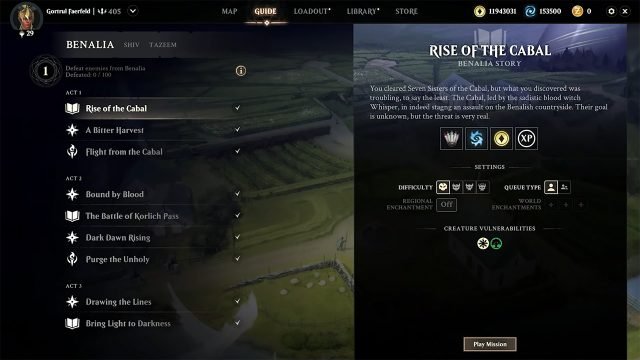 There are four levels to choose from, Normal, Hard, Expert, and Master. And by default, players will start off with the Normal difficulty.

You can unlock Hard, Expert, and Master difficulties by reaching certain milestones during your playthrough. So difficulties are unlockable with progress after your class level reaches level 30.

As you increase the difficulty level of a mission, you'll face stronger enemies, some gameplay mechanics or features are added to the mission through World Enchantments, and you'll also obtain a high quantity of greater rewards for successfully completing the mission.

World Enchantments is a type of item that modifies a Mission. Before you start a mission, you can apply World Enchantments to add, change, or alter various effects to the mission you are about to take. These are craftable items that can be made with materials, in your personal meditation realm. They are also tradeable at the broker and are consumable once used. Using these World Enchantments will up the challenge but also give significant rewards. You may find a list of each World Enchantment's effects and their individual pages here.